The beginnings of Serbian medicine and pharmacy match the period in which first medieval Serbian hospitals in Hilandar, Studenici and Dečani. The first written proof that there was a pharmacy in Belgrade dates from the 17th century and was recorded in the principal work of H. Schelenza (1904) “The history of pharmacy”.

This written work states that as early as 1661, there was a pharmacy in Belgrade, but there are no more specific data available. The opportunity to open the first pharmacy in Belgrade was given to Mr. Ph. Matej Ivanovic. Although he was the first graduate pharmacist who worked in Belgrade and is considered the founder of Serbian modern pharmacy, little is know about him.

The pharmacy that supplied drugs not only to the residents of Belgrade, but also to the whole of Serbia, and later to newly opened pharmacies, began working on the 30th of April 1830. It was located next to the restaurant “Znak pitanja-?”, opposite the Belgrade’s Cathedral- Saborna crkva, in the former Dubrovacka street, now Kralja Petra Street. At this place, Pharmaceutical Society of Serbia set a memorial plaque in 1955. 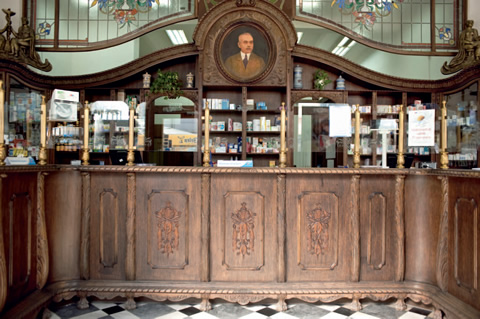 Two of our oldest pharmacies – “Matej Ivanovic" and "Makedonija"- the most important living monuments of Belgrade and Serbian pharmacy.

Pharmacy repeatedly changed its name, owners and locations, and at the end of World War II had become a social property in the newly established Pharmacy company of Belgrade.

In the meantime, the pharmacy was moved once again in 1964. to Knez Mihailova Street no. 27, where we are today. It was the only pharmacy in Serbia where an accurate and correct medicine could be received. She was a witness and bearer of historical and cultural events, but also a place where many important personalities of Serbian pharmacy had the honor and opportunity to gain experience.

So it is today, after 180 years since its founding, in the best way with its professional staff, highly professional service and care for the health of its fellow citizens, it preserves the tradition and quality of Serbian national pharmacy.

Founder of Pharmacy “Belgrade” was the Republic of Serbia, that is, the Ministry of Health of the Republic of Serbia, and from January 1st 2007, the founding rights moved on to the City Assembly, when it was renamed Pharmacy Institution “Belgrade”. The institution was first based in the premises of “Jugolek”, and in 1972 received a business premises in the primary healthcare unit “Vracar”, where its headquarters are today. Since its beginnings – unification of pharmacies by municipalities until now, has suffered many crises, and despite political and social changes, still went ahead achieving great business results, good cooperation with all health, education and research institutions, working with a devote to preserve and improve the health.